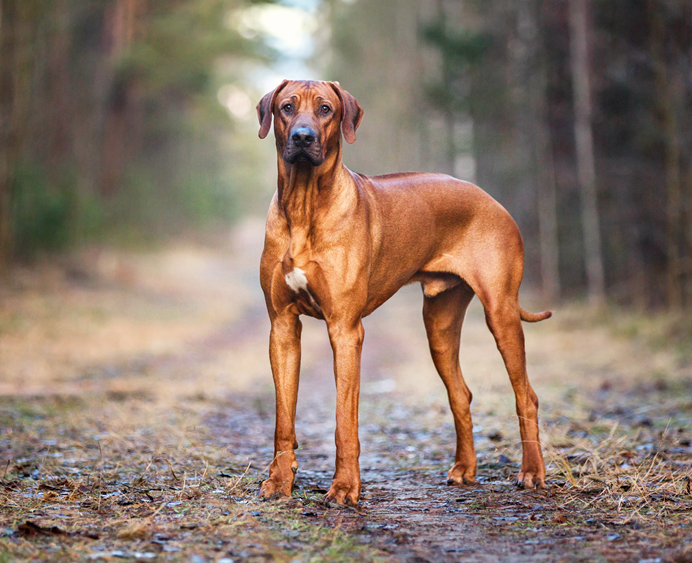 The Rhodesian Ridgeback Dog or African Lion Hound is a dog breed well known for its ability to hunt lions. It generally weighs between 45 and 70 pounds and stands at 22 to 27 inches tall at the shoulder. They live between 11 and 14 years. The first dogs of this type came from South Africa, where they were used to keep lions away from farmers’ livestock.

Breeders in South Africa got rid of the dogs when they were no longer needed. Then these dogs found their way to Europe, where they were bred to be bigger and stronger than ever before.

The breed was recognized by the American Kennel Club in 1955. Many people are not even aware that this is a purebred dog because it looks so different compared with other breeds in America today. It’s sad to say but many Rhodesian Ridgeback Dog Breeders have given up on this heritage breed because not enough people appreciate them for who they are, fine hunters and loyal companions.

Interesting Read: Cane Corso: Every Information About This Breed

Are Rhodesian Ridgeback ​Good With Kids

“Good with kids” is a relative term and depends on the individual dog and whether it has been socialized properly. Rhodesian Ridgeback Dogs tend to be very attached to their owners, which can make them overly protective of children in the household.

If you do choose this breed then we really recommend that you enroll your puppy into formal obedience training classes as soon as possible.”

The Rhodesian Ridgeback is a hound dog, whose impressive qualities are largely due to the fact that it is an African breed. They are prized for their hunting abilities, but also make great pets. Here are the facts you need to know about this beautiful breed.

Rhodesian Ridgebacks were bred in Africa as big-game hunters. The dogs would fight off lions that came too close to villages and farms with livestock. There have been conflicting reports about how long these dogs have existed in Africa, but many experts claim that they go back hundreds of years. Native Africans referred to them as “Asis” or Lion because of their bravery against big cats.

Migrating European settlers in Africa began to use the dogs themselves to hunt lions for sport. As Europeans moved into the area, they brought their dogs with them and this is how the Rhodesian Ridgeback Dog Breed continued to evolve. These breeds are now extremely different because of extensive breeding by various dog breeders throughout Europe.

The dogs were eventually brought back to Europe in the 1800s where they continued to be bred. They became popular in Great Britain, but also found supporters in Holland and South Africa. The breed began being registered by various kennel clubs between the 1900s and 1920’s.

It was recognized as an official purebred of South Africa in 1922. During World War II many animal rights activists stopped breeding Rhodesian Ridgebacks because they thought that their large size would put them into conflicts with humans. The fanciers that did continue to breed the dogs worked hard to revive interest in this majestic breed.

READ ALSO  Are Patterdale Terriers hypoallergenic? The answer may surprise you!

The Appearance of Rhodesian Ridgeback Dogs

The average height of a Rhodesian ridgeback dog breed is between 23 and 28 inches.

The average weight is between 80 and 110 pounds.

There are often slight variations in the ridge count of Ridgebacks which do not disqualify them, but they must meet certain standards for show purposes. A correct ridge has exactly four peaks; any additional or missing hairs is considered an imperfection and penalized according to the number present or absent.

READ ALSO  Golden Retriever: Everything You Need To Know About This Breed

Temperament in a Rhodesian Ridgeback can vary considerably, ranging from bold and playful with a tendency to be dominant to aloof and dignified but still playful.

They may not get along well with another dog of the same sex in the household, especially if it is also a dominant type.

Ridgebacks are confident and brave dogs that may exhibit some aggression when faced with unfamiliar animals or people, but they have been bred for generations as outstanding guard dogs that will defend their owners against any threat.

These dogs require patient training from an early age by someone who can establish themselves as an alpha leader without being harsh or heavy-handed. Most Ridgebacks will embrace learning and respond well to encouragement.

Ridgebacks are known for having a high pain tolerance, which can make them difficult to handle in emergency situations where pain medication might be required; this is not typical behavior, however.

The breed ranks 10th in Stanley Coren’s “The Intelligence of Dogs”, being of above-average working/obedience intelligence. They can do well in obedience trials and dog agility trials, but require an owner who understands canine instincts and is willing to invest time into training the dog properly.

If they sense that their owners are not confident in training the dogs, they may begin acting out by barking incessantly or chewing things around the house. They can learn quickly, and they love to work.

This breed does well with adequate food, so buy the best quality you can afford. Overfeeding has been associated with bloat in this breed, so avoid free feeding and also do not allow your Ridgeback to exercise for at least half an hour after eating.

If you purchase a puppy, ask the breeder to recommend a premium food that has been tested and found safe for your new dog.

It will still be necessary to examine the ingredients on the label if you are switching brands, for some food companies might change their formulations without warning. Whole foods such as lean beef, lamb or chicken can provide variety in addition to meeting nutritional requirements; however, it is important that all meat should come from human-grade sources rather than pet-grade sources.

Rhodesian Ridgebacks do not require extensive grooming, but they do need to be brushed regularly. Brushing will help to remove any shed fur, and also help to train them for future grooming.

These dogs naturally have a very sleek coat with little thick hair between their skin and the topcoat. This means that they are unlikely to become matted or tangled. However, it is important to brush them regularly because of the small tangles that can occur in their long coats.

Since they have a propensity to run through the woods and play on grass, there’s going to be a lot of dirt that will get stuck in their coats. These dogs are known for being somewhat poor candidates for the water, so it might not be possible to bathe them too often. Failing to keep the dog clean can lead to skin issues.

Rhodesian Ridgebacks are also known for having strong “doggy” smells, so owners should be prepared to use doggy deodorizers in conjunction with regular brushing.

The exercise requirements for this breed are quite high, and this is why they make such good jogging and walking partners. They require a lot of exercise, but they also need discipline to be exercised in the correct way.

Hiking with your Rhodesian Ridgeback Dog can be very rewarding, but beware that due to their protective nature you will end up carrying more than one heavy bag on your way back.

As with many dog breeds, the best way to avoid health problems is to get your puppy from a reputable breeder. However, even dogs raised well can develop hereditary conditions later in life. These are some of the most common issues that Rhodesian Ridgebacks may face:

A common hereditary disorder of the hips, it occurs when there is an abnormal formation of the ball and socket. This improper development can cause pain for your dog, and problems walking or climbing stairs later on. If you notice your Ridgeback Dog has difficulty getting up from rest (and this gets worse as they age) then this may be a sign that your dog has hip dysplasia.

If you notice your Ridgeback Dog has difficulty getting up from rest (and this gets worse as they age) then this may be a sign that your dog has hip dysplasia.

Also known as “bloat”, it occurs when the stomach swells with food and air and the resulting pressure prevents blood flow to extremities like the heart and gut. If first aid is not administered immediately, it can lead to death within hours of onset .

If first aid is not administered immediately, it can lead to death within hours of onset Cone Degeneration – The Cone was once thought to only affect some breeds like the American Cocker Spaniel, Staffordshire Terrier, or Old English Sheepdog. It is known to be an inherited disease that causes degeneration of the retina. Dogs with this condition have trouble seeing at night and are much more likely to have accidents due to their lack of vision .

Dogs with this condition have trouble seeing at night and are much more likely to have accidents due to their lack of vision Cataracts – Similar to people, dogs can develop cataracts which cause problems with sight. These cataracts may form after birth or they may occur later in life . Surgery is the only way for affected dogs to regain normal eyesight.

Rhodesian Ridgeback puppies can cost $1,700 – $2,500, but the price will vary depending on where you are looking. Of course, your best bet is to contact a reputable breeder.

Breeders are more likely to have dogs with excellent temperaments, so it’s also something to look for if you’re interested in adopting a dog instead of buying a puppy.

If you’re looking for adult Ridgeback Dogs , they can cost around $1,700 – $2,500– the prices will change depending on factors like age and breed quality, but regardless of your purchase it’s never a bad idea to check with local shelters first .

You’ll want to try to rescue an older dog rather than adding a newborn puppy to your household, because there are many adult dogs at local shelters that would benefit from a good home .

If you want to adopt an older dog then make sure that they’ve had all of their necessary vaccinations before putting them in your car. Veterinarians recommend waiting until the vaccinations are complete (typically after 3 weeks) but if you’re worried about the dog being unprotected then you can call up your local shelter and ask them to vaccinate the dog before picking them up.

The initial purchase cost of a Ridgeback Dog is just the beginning. You can expect to spend around $1,700 – $2,500 if you get a puppy from a breeder. If you get your Rhodesian Ridgeback Dog from a shelter then they may be more affordable options starting at just $50 but remember that the adoption process can take awhile.

You will also need to pay for basic pet supplies, like food bowls and leashes, which cost anywhere from $20 – $300 depending on the quality of toys you get too. Some dogs are picky eaters but there are different foods that your dog may enjoy eating, so ask your veterinarian if they have any recommendations.

The average annual expenses for a dog is around $1,400 to $4,300, but this depends on factors like your location and the quality of veterinarian you work with.

The Rhodesian Ridgebacks may be expensive dogs to purchase, but they can make great pets with proper training and care. They will protect your home and family fiercely at all costs ! If you have any questions about this breed feel free to comment!